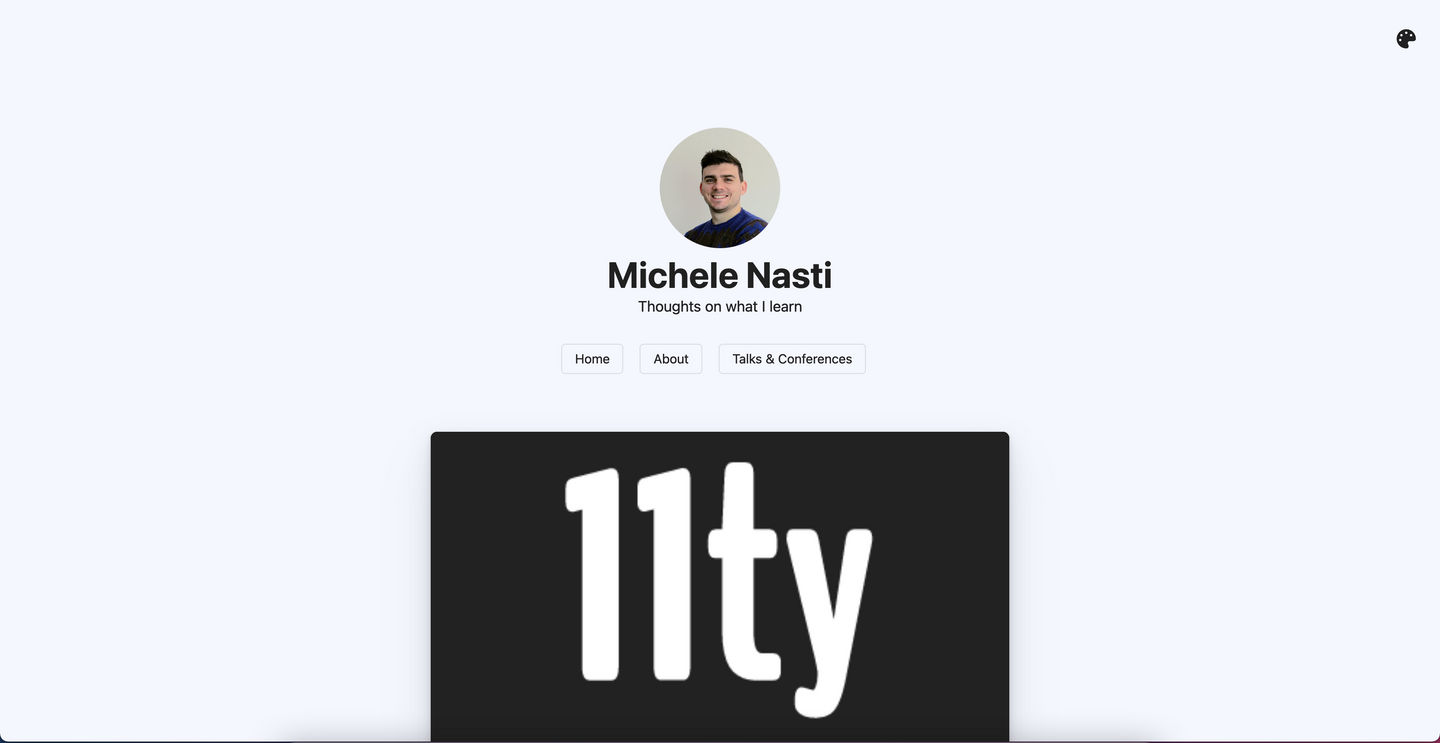 So, here it is! my redesigned blog is finally live.

It has just been migrated to 11ty from jekyll, and redesigned, from a theme called Strata to something super-custom heavily inspired to Gridsome blog starter.

Migration itself was not an easy task; but internet is full of migration guides. The issue I spent most time on was checking that all my previous permalinks were not changed. I'll probably write another post about that because it ended up in a script that I think it's useful for most.

I think it's the right time to write a bit about the story of this "blog", that I consider my side project. Usually people work on apps, startups, or whatever. In my case, I think I have two pet projects, this blog and the developer's community of my area, called DevDay. Let's analyze this blog in this post.

I started blogging back in 2005, I think. At the time blogging was cool, since there were no social networks yet, and everybody was on chat apps like MSN (the favourite of my circle), from Microsoft. This chat app was the de-facto standard for us youngsters. It also offered a blog platform called Live Spaces (later acquired by Wordpress). I loved sharing my photos, or very stupid stories about my university exams and nights out with friends. When I pushed an article, a new badge would appear at the side my name in the chat app.

All of a sudden I started hitting the limits of a proprietary platform. I had no control over themes, I couldn't easily export my own posts. The best browser to upload photos was Internet Explorer!

I started looking for other blogging platforms and, at the time, the most advanced products were CMSs like: Joomla, Drupal, and ...Wordpress.

Worpress, back in the day, was on the edge. I think I decided to migrate when Wordpress just hit version 2. So, that was the moment I bought my first - now defunct - domain, around 2008-2009. However, my blog was veeery small and followed only by some close friends. I think the latest post was added around 2013.

Around 2015 I decided to dicth my "personal" blog because I had no interest at all in writing about myself (and being read by nobody). So I decided to buy another domain more linked with myself (this one!), and to start again with Wordpress.

Michelenasti.com is born: back to Wordpress (~2015)

My main goal in this phase was to document my progress in javascript learning. Javascript in 2015 was just being revamped and nobody in my team was able to work in it. I decided to learn this skill and use that as a competitive advantage. This was a choice that brought me a lot of returns.

Wordpress is fine for a lot of use cases. For example, it is a good blog engine under the hood, however it is mostly used now for media projects like newspapers, landing pages, corporate websites. There are some downsides however:

You end up doing maintenance only and never writing content. That's not what I wanted to do in first place. So after a while I decided to switch to Jekyll.

Jekyll is a static site generator. Instead of a database, you can create a file per every article. This is so cheap to achieve and to serve, that many popular services are offering static hosting for free. I decided to switch because almost all blogs I was already following were done in Jekyll, and this gave me the guarantee that I was on the right path; also, there is a nice integration with Github called Github Pages, and you can host a subdomain for free.

I learned a lot with Jekyll. At the time I used to work for an enterprise that was redesigning a bunch of their websites, I proposed (and obtained) to rewrite all of them in Jekyll, it was a huge success. They're still in Jekyll to this day.

Welcome 11ty, then. Honestly, I felt to do the redesign because my previous website looked old. But I still plan to write what I larn, what I do, and what i discover. I hope you enjoy,

Together with 11ty, my current blogging setup is composed of:

I am not affiliated with any of these services and I use their generous free tiers.