JWT: what is it? How does it work? Why should we use it?

In this post I'm going to talk about an authentication "protocol" called JWT, that allows to secure an API so that only authenticated users can use some requests of your API. And more importantly, a user cannot impersonate another by changing something in the request, so we can be reasonably certain that a user is who claims to be.

However, to understand JWT, we must step back and talk about hashing functions.

JWT is universal, it will be easy to grasp the concepts in any language you like, but I'll use NodeJS for this post.

Create a new Node project anywhere you like. We will use this project to do our experiments. In order to use hashing functions in Node, create and enter a new directory, and install crypto-js:

Now, let's create a new file, hashing.js and fill it with this:

Let's run this file. What will we get?

What's happening here? We are importing the function SHA256, that is one of the strongest hash functions we know for the moment, with mathematical proofs, etc. 256 is the number of bits of the hashed message.

Basically, the message text will be converted in a new string of just 256 bits, and this string has some unique properties:

Curious? I won't lie to you, security is one of the hottest themes in computer science; this stuff is hard, btw we are just using it and the three points before should be sufficient for you to understand.

When to use a hash

You might use Hashes in a lot of different situations; we will use them in authentication, but another famous use case is to store passwords in your database. Bitcoin also uses hashes to mine new bitcoins (italian).

Passwords should never be stored as plaintext, because users have this bad habit to use the same password everywhere (I guess you don't, do you?).

So, when a user logs in your system, you should hash their password, and see if it matches the one stored on the db.

To increase security, always use HTTPS too.

Back to our hashes

So the user has logged in. Now we want to provide them with a token that certifies that they are who they say they are. What can we do?

It's not so safe to send the password over and over; an attacker could steal it by listening to the network calls (man in the middle attacks) or by just hacking the client, or the server.

The safest way is to provide them with a token. A token is a piece of data (a json, obviously) with some authentication data we need. We give this token to the client, and he will send it back to us with every request.

So let's create a json object with the user' ID:

We obviously don't want that the user can change their ID with some other ID, for example the admin ID. So we can create a new object called token that contains the data and the hash of the data:

We now have a token, but ... if the user tamper the data, he can just recalculate the hash and he won.

How can we prevent that the user won't tamper the data? The most used technique it's also the simplest: we just concatenate a string, called salt, that in our case is a secret password.

So the previous example would be something like this:

Wait, but what if the user knows the salt? They shouldn't! Once they're logged in, you send them this token signed with the server's salt and you can be sure that the client cannot recreate the hash back again.

We could write all the edge cases, but that would be a lot of work. Instead, there's a library that does just this, JSON Web Token (JWT): it has becomed a de-facto standard for authentication tokens, even if not all the web loves it.

With this package we get two functions: one to create the token (sign), and another to verify (verify).

So let's create a new file (we are not going to need the previous stuff anymore) and start over.

this is different from the hash we presented before: it is divided in three blocks, and it's clearly bigger. What's going on?

Let's copy this string and go over jwt.io, where you'll see a cool tool that will explain the JWT: paste it in the left side. 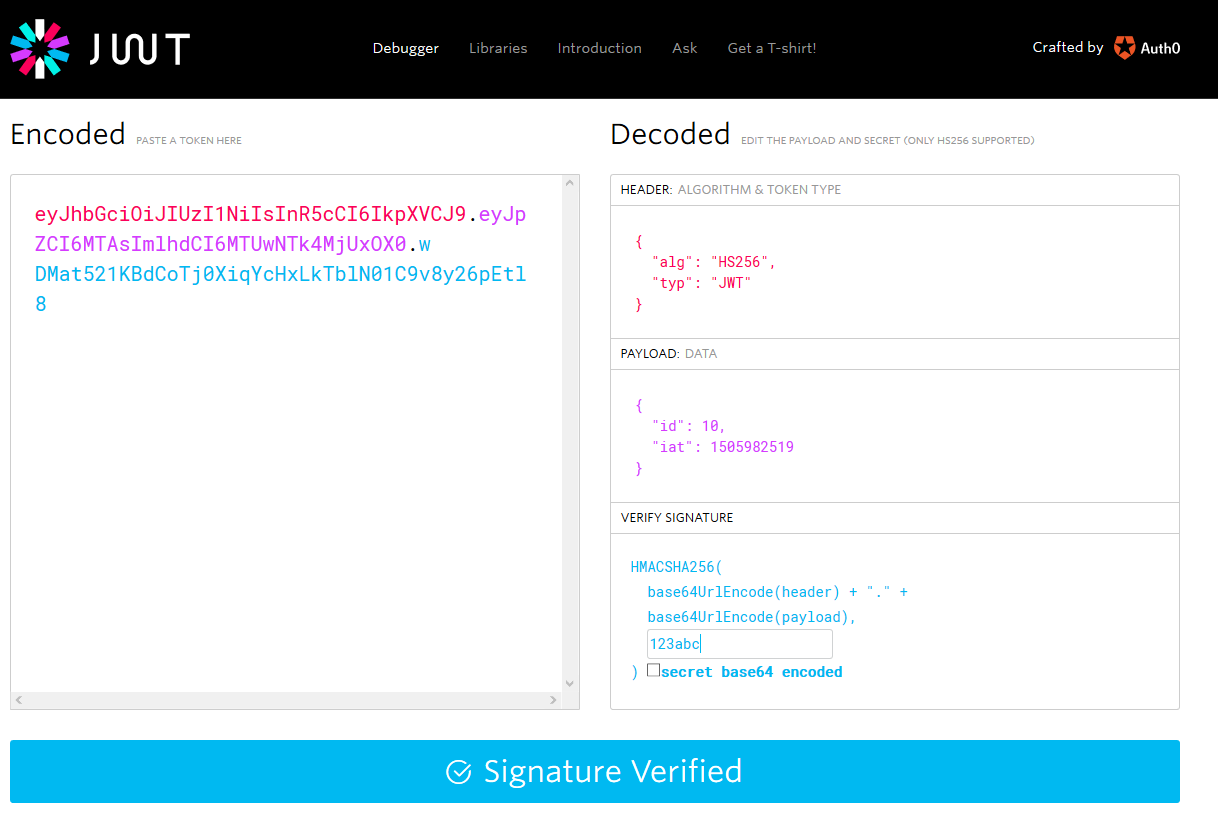 Verify that the token is valid

And if we try to change anything in the token, or in the secret, we get a javascript Error back:

Not very clear, but once you know, you'll catch it.

In the past years I have dealt with authentication checking on database if the user was logged.

Think about it: for. every. request. How much delay we introduced? Could we scale? Obviously not!

With JWT the database is not needed anymore (at every request), because we can stay safe that the user has not tampered data and because we know when the token was issued, so we can decide to block the authentication after, you say, 24 hours.

UPDATE: it seems that you might need the database however, with different strategies depending on your needs. Check out the comments thread, and thanks to Stas Kaufman for pointing this to me. However, i believe JWT can scale better than session tokens: think of a 2 million users logged in to a cluster of servers. You loose some things but you earn scalability.

Now you can handle as many users you can, thanks to hash functions and JWT!

This post would have never existed without the brilliant course by Andrew Mead about NodeJs. Check it out.